Zeta Eta 2.0 : Managing the Crowd of the Chapter and Beyond

[dropcap style=”font-size: 60px; color: #0099FF;”]W[/dropcap]hen is the next meeting? Where is the fundraiser being held again?  Do you have a copy of the chapter’s constitution?  Getting the word out about chapter activities and keeping up with chapter files can sometimes be difficult.  When I became a member of the Zeta Eta chapter in the spring of 2004, this seemed to be the norm.  A meeting would be called and half of the chapter would show up.  Although the meeting was announced via text message, some brothers did not have a cell phone or the service on their cell phones was disconnected, resulting in only a few brothers getting the message.  The problems weren’t just with communication either. New officers would be elected without critical chapter documents being transferred to the new officers.  This was likely due to outgoing officers graduating or poor record keeping.  As a result, the newly elected officers had to recreate documents which proved  to be highly inefficient.  However, the chapter has taken innovative steps using Web 2.0 technology to keep brothers informed and to keep important chapter files preserved for future members.

What is Web 2.0? Web 2.0 is a concept that takes a network (such as a website network) and uses it as a platform for information sharing, interoperability, user-centered design, and collaboration on the World Wide Web. A Web 2.0 site allows a user (in our case Brothers of Zeta Eta) to interact, work and share with each other in a social media dialogue as the creators of “user-generated content” in a virtual community. Put simply Web 2.0 is any website or web utility that allows web users to interact with it as opposed to just reading content from it like a static website. 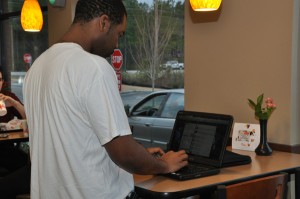 Since Web 2.0 technologies such as Facebook® and Twitter® have revolutionized how people interact with one another on a daily basis, our chapter has recognized the value of using these two applications.  The chapter started out creating groups on Facebook® which solved the problem of members not receiving pertinent information about chapter activities.  This was due in part to nearly all members having a Facebook® account and checking it on a regular basis.  Currently, the chapter has two private groups; one for active members and the other for active and alumni members.  Facebook® groups have proven to be an excellent means of communicating with current and alumni brothers.  However, there was still the issue of letting the general population know about chapter sponsored events.

The primary modes of communication on campus about chapter activities were flyers and by word of mouth.  Now, the chapter extensively uses the events application on Facebook® to announce its events.  In addition, the chapter has taken it a bit further by creating a chapter fan page (www.facebook.com/ZooHouse1971) and a Twitter® page (www.twitter.com/ZooHouse1971).   These avenues allow the chapter to reach out to an even larger crowd; by using these two applications, there has been an increase in attendance at meetings and chapter sponsored events on campus without the necessity to do much more work than before. In fact these web applications allow for more of our time to be dedicated to planning new events, not just advertising the same ones.

However, there is still the problem of keeping up with chapter documents. Passing down chapter files has been an ongoing issue and it is frustrating for new officers.  To circumvent this dilemma, I created a DropBox® account to store all of the chapter’s files.  Within the DropBox®, folders were created for each officer and committees.  These folders were then shared with their respective officers.  All it took were those simple steps – to my amazement, files were being uploaded at a staggering rate.  Photos, meeting minutes, committee reports, and financial reports were some of the main files being uploaded.  Previously, files were stored on flash drives or on a brother’s computer.  Now, these files can be easily accessed and updated from any computer, provided there is an internet connection.  Once new officers are elected, the folders are shared with those officers, and the access to outgoing officers is removed.  The only thing required for the members is to create a DropBox® account.  Although DropBox® only gives two gigabytes of space – which for us at least is more than enough – the chapter can create retention rules to purge the DropBox® of old files after a prescribed period of time.  However, before deleting old files the chapter archives them. All old materials are printed and submitted to the University’s archives for preservation.

Lastly, the chapter also has a website (www.wix.com/zetaeta/kkpsi) where alumni and others can donate to the chapter through PayPal®.  It’s a few easy steps to setup and connect a non-profit account (contact HQ for more information on how to get your TAX ID number) through paypal and start advertising “Ways to Give” to your chapter.

These are a just a few ways the Zeta Eta chapter has used technology to improve its efficiency and “manage the crowd.”   Some other chapters may already be using these Web 2.0 technologies and some may be using others.   However, we encourage other chapters to take advantage of Web 2.0 and all that it has to offer. The Zeta Eta chapter has made great strides since 2004 and they should be proud of themselves for their efforts. So, like us on Facebook®, and follow us on Twitter®, and share your Web 2.0 experiences with us.