Where is Your National Shrine?

As you can see, the National Shrine of Kappa Kappa Psi has been moved. One day while crossing campus, Brenna Hensley (Alpha Chapter President) was passing near the shrine, and as normal for most members glanced over to make sure the shrine was ok.  But this time it was different, there were workers around it and marker flags in the area surrounding it. Physical Plant employees with clipboards and measuring tapes were there marking pipes and cables in the area.  Making a sharp right-face like every good marcher should, she approached one of the workers and asked what was going on.  The worker said that they were prepping the area for some renovations; it was an expansion of the new Student Union courtyard which lies just to the south of the shrine.  Then Brenna being a little taken back by this news asked the obvious question, “So what’s the plan for the monument there in the middle?” To which the worker replies, “Oh, we’re going to move that”.  Keeping her cool, she told him that she was a member of Kappa Kappa Psi and asked if he had informed the National Office of the move. “No”, he replied, “I still need to figure out how to do that.” The worker Brenna was talking to was Mr. Steve Dobbs, Manager of Grounds and Landscape Services for Oklahoma State University. Mr. Dobbs was grateful for the information on how to reach the National Headquarters, and said it was on his list to do but he wasn’t sure who to call.  After her talk with Mr. Dobbs, Brenna headed for Headquarters to share what she had seen, and to let us know that the university was planning to move the Shrine. After hearing the story, Headquarters took her information and made a few calls resulting in a meeting with Mr. Dobbs at HQ to share the University’s plans.  The next day, armed with the all the history and information that could be found, the Headquarters Staff waited for the arrival of Mr. Dobbs not knowing what to expect.  We had all kinds of questions in our heads like: Where were they moving it to? Will we like the new location?  Will we have any input is any of this? What if its totally unacceptable? 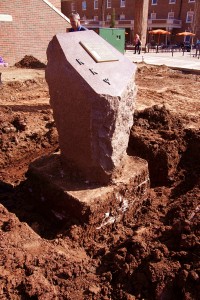 The meeting with Mr. Dobbs was attended by Alan Bonner, National Executive Director; Aaron Moore, Alumni & Historical Development Coordinator; Dale Croston, Chapter & Colony Education Coordinator; Di Spiva, National Accountant; Brenna Hensley, KKΨ Alpha President; and Alex Schallner, TBΣ Alpha President. Mr. Dobbs started by providing background for us on how this project came about. According to Mr. Dobbs, it started on January 27, 2012 when he was approached by Clark Brockahan a Senior Landscape Architecture major, along with a group of about 15 students from the ECO-OSU Student organization, Alpha Phi Alpha Fraternity and American Society of Landscape Architects (ASLA)-OSU Student Chapter. The group had come up with an idea and wanted to orchestrate a large specific project for Campus Beautification Day on March 28th. The focus area for the project idea was the location on the west side of the Classroom Building, which had been the home to the Shrine since its dedication in 1960.  The new renovations to the Student Union and its new Union Plaza adjacent to the shrine left this area, in their eyes, in need of an update to match the rest of the Library Lawn while, at the same time providing better focus and functionality. Their plan connects the new Student Union Plaza with the area by the Classroom Building by extending the style of the Union Plaza to the west side of the Classroom Building. The plan called for new bike racks, benches, social areas and functionality for student groups to set up tables with tent coverage.

According to an article on the Oklahoma State University website by Trisha Gedon, Brockahan stated that the planning for this new landscaped area began in fall 2011.  “Martin Smith with Alpha Phi Alpha received a $1,000 grant for a beautification project. He contacted Morgan Hopkins with Eco OSU, and they in turn contacted ASLA,” Brockahan said. “We had been looking for a project to do on campus, so we decided to combine our efforts. From there we contacted the physical plant and the plan just started coming together. We submitted a landscape plan and OSU administration accepted and agreed to fund it.”

The date set for the Campus Beautification work day was March 28, giving Mr. Dobbs only two months to pull the entire project together. The first step was finalizing the plans: the ASLA team came back to Mr. Dobbs on February 9th with two design proposals to submit for review and on February 10, a design was selected.    The next step was to pull together construction documents and a budget estimate to give to University Administration who would then have to vote for approval of the funding.  It was during this step that Brenna, our Alpha Brother came into the story.  Mr. Dobbs asked for some background information about Kappa Kappa Psi and Tau Beta Sigma, two organizations he had never heard of before. After receiving a brief history lesson, he was truly impressed with the scope and impact our organizations have across the country. The Headquarters team shared some of the history of the Shrine and the focus it has as a hot spot for chapters and members when they come to Stillwater; so naturally the relocation of our shrine was a cause for concern. Having a new understanding of the focus the Shrine would bring to the campus, Mr. Dobbs presented the design that was chosen for us to review with a reminder that at this point it had not gone to the Administration for funding approval. Mr. Dobbs displayed concept drawings with several views of the site. It was a very nice design, and we were all pleasantly surprised with the sketches of the area where the shrine was. Some feedback and perspective were provided on potential adjustments or concerns that were identified by our group, and were well accepted by Mr. Dobbs.  With that, and Mr. Dobbs’ thanks, the meeting came to a close.  On February 20th the project was approved, and four days later construction began in order to have the site prepped for the student workday on March 28. 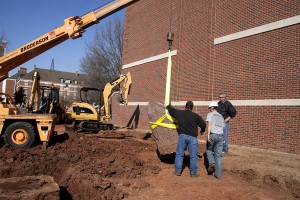 By March 28, 2012, the Physical Plant Grounds and Landscape Department finished the prep for the paver brick work, irrigation installation, and landscape planning; while the Physical Plant Carpentry shop did the brick work on the new seating walls. The sub-concrete work and the precast stone portions of the project were subcontracted by outside vendors.  The Shrine itself was removed on February 25th, and the site was ready with the shrine in its new location just in time for the workday. The big day came with about 50 students, including members of both Alpha Chapters, working to help complete the project. 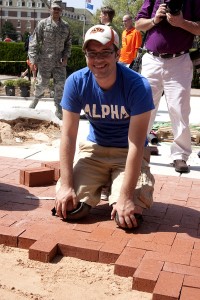 On the work day, the students helped lay a large part of the pavers, planted trees and shrubs and placed mulch on the flower beds.  OSU President Burns Hargis and his wife, Ann, were on hand to see the landscape design created by the students come to life. They also joined in with students and other OSU personnel to plant a Ruby Spring™ Nuttall Oak, which will display brilliant orange leaves in the fall and complement the other landscaping efforts of the campus. In addition to this main project, several teams of students went around the campus working on other smaller projects.

“So many of the good things on this campus start with our students, and the continuation of the Student Union Plaza is a great thing. It’s so important to have a beautiful campus, and I’m proud to be a part of this Campus Beautification Day.” OSU President Burns Hargis.

“We are thankful for their support and help with campus beautification. Their enthusiasm and willingness to volunteer is very impressive… Those who participated in the Campus Beautification Day were very creative, organized and demonstrated great leadership within their peer groups.” Steve Dobbs, Manager of Grounds and Landscape Services for Oklahoma State University.

Several of the groups involved not only donated their time and crafts, but also donated money to the project to help offset the cost of the surprise project which came out of the University’s Grounds Beautification Budget. Martin Smith with Alpha Phi Alpha received a $1,000 grant for a beautification project and was able to join forces with the other groups. The ASLA-OSU group had also applied for a grant to help offset the cost of their project and was awarded $7,600.   The Project was totally completed on April 24, with the placing of the cap stones for the benches around the back edge with a final price tag of $61,043.

Oh, you probably want me to get back to the big question. Where did the Shrine go? Our National Shrine’s new home is located about ten feet back and to the right of its original home. If you have ever been to the shrine, you know it is at the west end of the Classroom Building in a small patch of grass surrounded by large shrubs and it looks sort of out of place in the large Library Lawn area that it is a small part of.  The expansion of the Student Union’s courtyard brings a whole new focus to the area around the Shrine, and now, with the expansion by the students, our shrine and our organizations have become a new focal point on campus.   No longer is the Shrine standing alone, out of touch from the casual passerby.  The new site places the shrine in a prominent location interacting with the students and campus activities and helping to draw attention to Kappa Kappa Psi and Tau Beta Sigma.

The timing of this project could not have been better even if we had planned it ourselves. This unprecedented project has given our Shrine, and the area around it, a much needed face lift just as planning for celebrations of Kappa Kappa Psi’s Centennial Celebration are on the horizon. The dedication and service shown by the OSU students and their student groups was amazing.  The pride for their campus, service to their school and organizations, along with the expressed care given to us and our Shrine has great parallels to the high standards we have in our own schools, band programs, and Kappa Kappa Psi / Tau Beta Sigma.

For more detailed pictures of the construction around the shrine and the process it took to move it, see the printed Fall 2012 Edition of the Podium publication.