[dropcap style=”font-size: 60px; color: #0099FF;”]W[/dropcap]hen I first started at the University of Maryland, I knew I was going to be a member of the Mighty Sound of Maryland and hoped that would be the only time I would have to endure life as “Nadine’s younger sister”. It’s not that I don’t love my sister, but because we differ in major ways and are both individuals. Even though we would be in different sections, I knew she was fairly well known in the band. I was aware of Tau Beta Sigma through Nadine but thought I wanted a different experience; I believed I wanted to join a “social” sorority. However, after visiting each Panhellenic chapter on campus, I had not quite found my fit.

It was not until we were driving home for Thanksgiving that I realized Tau Beta Sigma was for me, too. While cruising the left lane of I-95 home to New Jersey in my sister’s TBΣ-labeled vehicle, a car began to honk at me. As a fairly fast driver, I could not imagine why they would be bothered by my pace and continued  onward, confused. The car then sped past us and we were able to identify by their license plate “Howard University – Tau Beta Sigma.” Catching up, we drove side-by-side while my sister and this stranger exchanged names, instruments, and “Sigmas” before we had to part ways. It seems like a small instance, but after this experience I was set on the idea of Tau Beta Sigma, despite Nadine’s presence, and I would not change it for anything. 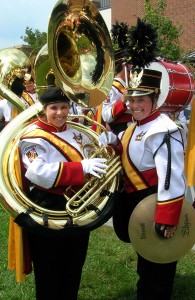 First of all, I have been able to establish myself as my own bandsperson and sister, not a shadow of my biological sister. But more importantly, I have had the opportunity to become close to my sister whom I clashed with in high school. It could have been attending the same school or being in the same band; it could have been a new-found maturity in our relationship from growing up… However, I attribute our bond to being biological-sister-sisters in The Bond which really made the difference. At some point during my process, we went from blood relatives who sometimes hung out and scarcely talked to sisters who spoke on a regular basis and shared a lot more. Even after she has graduated, Nadine remains a great source of advice on everyday life and TBΣ matters.

Not many people get to experience this feeling of having no secrets from their siblings but I consider myself lucky. The Bond has not only brought me closer to the band, my fellow bandspeople, and my school; being doubly “related” has brought me much closer to my biological sister in a way that I never expected and that I will truly cherish.