Members of the Howard University “Showtime” Marching Band woke up with more excitement than they did on ordinary performance days on September 24, 2016.

This was no ordinary performance. They were about to make history as the opening act of the dedication ceremony for the Smithsonian National Museum of African American History and Culture. According to the museum’s official website, it was “established in 2003 by an Act of Congress, making it the 19th Smithsonian Institution museum. It is the only national museum devoted exclusively to the documentation of African American life, art, history, and culture.”

The band reported at 5:45 am to ensure they arrived at the museum early to go through security.  Quitman Starks, a drum major for Showtime, recalls feeling worried that some band members would not make it to the performance. “It was stressful because even though we told everyone what time to be there and to not be late, people still didn’t show up on time, but thankfully everyone made it to the museum.” 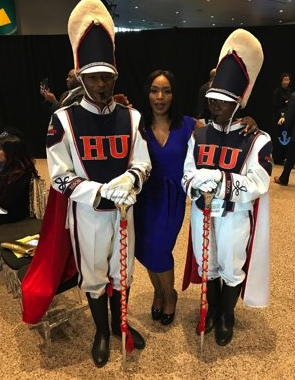 Hundreds of people stood in line around them, the energy of the crowd palpable because of the historic event and the celebrities.

Excited cheers signaled the entrance of well-known celebrities, such as recording artists Stevie Wonder and Janelle Monae, and actresses Angela Bassett and Lupita Nyong’o, to name a few.

After going through security, the band anxiously waited in a room with other performers, such as choirs and dance groups.

The massive 4-story museum’s location and its design are meant to represent the past, present, and future of the African American experience in ways that are both tangible and symbolic.  It is historically located on the National Mall positioned not far from the White House, where the Showtime Marching Band had the honor of another historic performance in President Barack Obama’s 2009 inaugural parade.

When an event representative led the band to retrieve their instruments and warm up before it was time to hit the stage, it was just minutes until Showtime.  The band frantically ran to their spots as the representative backstage did a countdown. 3…2…1… SHOWTIME!

The band marched onto the stage and opened with their traditional “Fight Song,” then ended with “Skin I’m In” by Cameo. The audience was receptive, clapping and cheering for the band as they marched off stage. 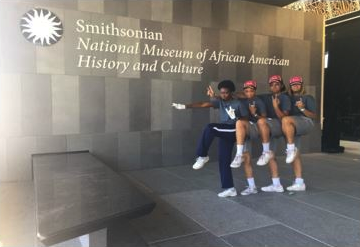 “Showtime” received many positive remarks about the performance. Parents, friends, and band alumni congratulated the band on their representation. More notably, Showtime was mentioned in an article by NBC Washington, talked about on Washington’s Top News radio, and a picture of the Band was posted in The News Herald. Instagram posts of the band’s performance also generated thousands of likes. One such post was of actress, dancer, and choreographer Debbie Allen (a proud alumna of Howard University) jumping up and down excitedly while the band was playing. Another post was a video snippet of their performance posted by television producer Shonda Rhimes herself.

Thrilled and star struck, band members loaded their bus to head back to the campus of Howard University. During the bus ride, everyone reflected on how honored they were to have been given the opportunity to be a part of such a historic event. Terrell Tiendrebeogo, euphonium section leader, relays the significance of the experience.

“It was about so much more than just seeing celebrities and being able to play for a distinguished audience—it was about using music to unify people of all different backgrounds to celebrate and recover the neglected history of a determined people. No one in the Howard University “Showtime” Marching Band who experienced the momentous occasion will ever forget it.”