This football season, the Gator Band had the privilege of accompanying the Florida Gators football team to Dallas, TX to play against the University of Michigan.  This special game was the Advocare Classic, and it served as the NCAA College Football kickoff.  This was a very unique situation for the Gator Band, as the first game of the season- the first game ever for first year members- was a full band flight to Dallas.

This trip was especially exciting because while most years the band attends an end of year bowl trip, taking a charter flight to an early season game was a new experience for the Gator Band as a whole.

The UF vs Michigan game was held on September 2nd, the second Saturday of the Fall 2017 semester. To kick off the trip, the band left campus at 7 am on Friday to depart for the airport. There were two flights going from Gainesville to Dallas, the flights were divided by instruments: trumpets, drumline, piccolos, tubas, FVE and Gatorettes on flight one, everyone else on flight two.  Members of Tau Beta Sigma and Kappa Kappa Psi took the luggage from lines outside of each bus and color coded the luggage to match each bus. It’s never too early to be serving the bands! Afterwards, the luggage was lined up to be sniffed by one of the UFPD dogs, Boomer. Shortly after the luggage was loaded, the buses on flight one departed for the airport. At the airport we went through a metal detector and had our luggage checked immediately outside of the plane, were given a “lunch” (it is now around 9 in the morning), of Panera Bread and a bottle of Gatorade, and then got onto the charter plane. 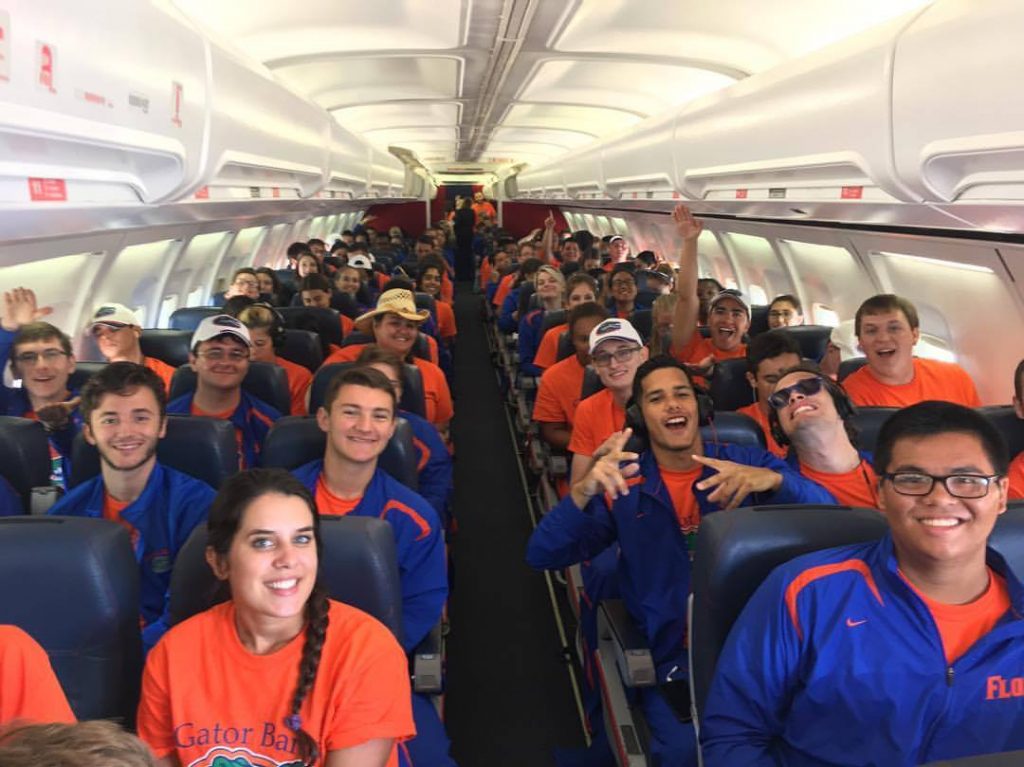 The plane was packed with Gator Band members and staff plus the crew members for the airline. Riding in a plane with 200 of your closest friends is an interesting experience as the general social rules for airplane travel do not apply. As college kids would do, during takeoff and landing we were acting as if we were on a amusement park ride. Gator Band is full of relentless energy and school spirit, demonstrated by the singing of Orange and Blue upon landing!

After we arrived in Dallas, the entire band in 8 separate buses caravanned to Frisco, TX to rehearse in the Dallas Cowboys practice facility: “The Star”. This was a really cool place to rehearse, as the normal occupants of the building were professional football players. The field was also an extremely nice turf field and it was indoors with air-conditioning, which made it a huge step up from Norman, our home field plagued with dust and occasional potholes. We had a quick but productive rehearsal at this exceptionally nice field, then proceeded to get back on the buses to go play at a pep rally for the game.

The UF Alumni Association pep rally was a fantastic way to get everyone excited for the next day’s game and a hopeful football season for our team! We played our spirited pep rally songs for the alumni and got to see the football pregame hype video for the first time of the season. It was interesting to see all the Gator fans in Texas, especially since this crowd of Gator fans was seemingly as numerous and spirited as our fans back home. Special guests at the rally included President Fuchs, Steve Spurrier, Emmett Smith, and representatives of the Athletic Association. After the pep rally was over, we once again got back onto the buses, loaded all the instruments back onto the truck and drove to our hotel.

The Gator Band’s host hotel was in downtown Dallas, and after arrival the band was given free time for the night- a rare opportunity on band trips. Different groups of band members went to experience the numerous different things Dallas had to offer. My group went to an interesting restaurant called Café Momentum, which had amazing food, and worked to provide opportunities for at risk youth. After eating, we went to visit a unique historical location: the plaza where John F Kennedy was assassinated. The next day, Gator Band also had a “free morning”, with call time on the buses at roughly 9:30am, a time unheard of for a typical Gameday. This gave us some time to catch up on some sleep, eat breakfast, or explore more of the city. We then left to go to the AT&T Stadium.

As the stadium drew into view, the hype of Gameday really began to set in. We put on our uniforms, got off the buses, and blocked up to march into the stadium. As typical for our travels to neutral sites, we marched past some thrilled Gator fans and some not so thrilled Michigan fans. We then got seated in the stands to warm up and check everything out. The band was given a break to buy lunch, and Kappa Kappa Psi started to set up the coolers for the band. Gameday coolers is one of the standard and memorable parts of gameday, especially in a foreign location. All active brothers participate, and we fill up sixteen coolers with ice and water to hydrate the 300 members of the band throughout the game. Coolers are a true test and sign of our chapter’s teamwork, and while we were unfamiliar with the location, we cheerfully filled and distributed the coolers efficiently before the game started.

After the break, everyone got reseated in the stands and waited to get ready for pregame. We exited to the field through a tunnel, and this gave the freshmen a taste of our pregame tunnel cheers to get us hyped for the pregame performance. On the field we were able to watch Michigan’s pregame, which was super neat. Big 10 bands are so extremely different in style from Southern bands, which makes them very fun to watch. While we were waiting for our turn for pregame, a Michigan fan insulted us with “Ya’lls plumes look bad”, and the trumpets all thought it was hilarious. Pregame was fantastic on the impeccable turf and packed stadium, and playing in the stands was similarly entertaining. Our halftime show “Summer of Love” was also a hit, with selections such as Jimmi Hendrix’ “Fire” and The Beatles “St. Pepper’s Lonely Heart’s Club Band”. Unfortunately, the Gators came out with a loss, and after the conclusion of the game KKPsi reloaded the hundreds of instruments to prepare for the travel home.

Our experience at the Dallas Airport was much different than that at the Gainesville Airport. This makes sense because the Dallas Airport is an extremely busy International Airport, and let’s just say that Gainesville is not. Unlike the celebrity treatment we were given in Gainesville, we all had to go through normal security and make our way through the normal airport surrounded by normal people. The entire airport was uncharacteristically empty; however, we were literally the only people in terminal E, all the stores and restaurants were even closed. Each of our two planes was sent to wait in opposite sides of the very large terminal. The band experienced our favorite tradition: “Hurry Up and Wait”, and even then they decided to switch the order that the flights were leaving in, so flight one had to wait even longer. By the time we got onto the plane it was close to 2 in the morning.

Getting on the plane at 2 am central time, the exhausted bandmembers all immediately fell asleep and slept until landing. We landed and unloaded the luggage from the plane, only to realize that we did not have the right luggage for the buses that were on our plane.  We took what we had and drove back to UF. When we got there, we found that the luggage for the planes had been switched, probably because they switched the order of the planes. The people on plane two (which was the one that left first) had been waiting for plane one to arrive with their luggage and they had the luggage for plane one. When it was all sorted out it was around 4 am eastern time. We went home and most of us went to bed close to the same time we had woken up two days prior to get to UF to leave at 7 am.

It was an amazing experience, but a 48-hour whirlwind.