A Month of Travels

I’ve always been one to jump at the chance to travel, but between March and April I think I exceeded my own standard: I saw sisters and brothers in 7 different states and, if you include the U.S., 3 different countries.

It all started over Spring Break. While the Northeast District was having their convention, I was gallivanting through the Irish Countryside. We went with a Study Abroad group from Oklahoma State University and Oklahoma Northern College. Who would have guessed that one of our group leaders was a KKΨ Alumni from the Alpha chapter? It gets weirder/cooler. Right after kissing the Blarney Stone to get the gift of gab, I ran into almost the entire Zeta Omega chapter of TBΣ and Eta Upsilon of KKΨ. How many people can say that they ran into over 40 of their brothers and sisters right as they are walking out of a 600 year old castle?

After taking a ferry and bus to England, we stopped at Oxford. I walked across the grounds of Christ Church College, their Dining Hall was used in all of the Harry Potter movies, I heard my name being shouted across the yard. I turned and see yet another sister that I met in Colorado Springs, CO during national convention! Apparently she was studying abroad and used the grounds of Christ Church as their study area. That made three separate TBΣ/KKΨ encounters in other countries!

Just four days after being back to the US, I drove to Rolla, MO, to attend the Midwest District Convention. I can’t even begin to describe how much fun I had. I got to see friends for the first time in a year, meet dozens of new people, see my fellow district presidents Carrie Lund and Kat Howell, and let’s not forget experience the musical science fair and fireworks display!

I had one week of rest and then drove up through Iowa to pick up a couple sisters and stay with Kelly Eidson before driving to Fort Wayne, IN, for the North Central District Convention. I knew each district was different, but it was so awesome being able to actually see how another district operated during their conventions. I met so many people and just had a fantastic time. 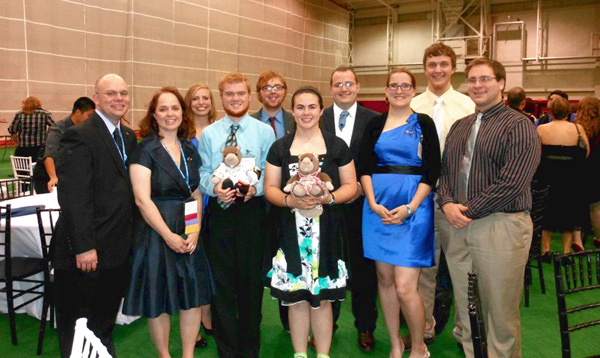 After arriving back to Kansas, it seemed like I was immediately back on the road… er, I guess in the air. That’s right, I rounded out two months of travel with a visit to the Southwest District Convention. Again, I discovered a completely new format for district conventions (not to mention the experience of having over 1,200 people in attendance). The weekend flew by and somehow I ended up in Atlanta, GA on my way back to Kansas. And yes, while there I met yet another sister walking through the airport.

The point of this story is to encourage you to be open to new opportunities and take advantage of the ones that come your way. Talk to the people around you, take advantage of random invites you get from chapters, and never talk yourself out of a trip. If you want to do something, make it happen.

Each person I talked to on those trips, each workshop I attended, each waking hour helped me gain something. I learned more about TBΣ by going to those district conventions than I ever thought possible. I met so many people and got so many ideas I’m surprised my head hasn’t exploded. Most importantly, I reaffirmed how important the work we do as KKΨ and TBΣ is to those around us, our band programs and our communities.