[dropcap style=”font-size: 60px; color: #0099FF;”]W[/dropcap]e grow up with an idealized concept of what college life is supposed to be like.  We learn all about it from movies and television, from our parents, from our friends who got there before us, and from our own imagination.  During adolescence, we construct clear-cut plans for how our time in college will play out: four years of adventure, studying, band, girls/boys, etc…the well-rounded ‘college experience.’  But for many students, things don’t turn out according to plan.

There are times in life when we realize that our circumstances and direction don’t match up with our adolescent dreams of college.  We may wash out of our first and second choice of major.  We may not end up getting the grades we’d planned on.  Our financial aid may not stretch out as far as we’d hoped.  That four-year dream can become five…or six…or…  For some people (like me), it can be all of the above.  When things fall to pieces, there is inevitably blame to go around.  Your parents are disappointed.  Your friends move on, but you don’t.  When you don’t graduate with your peers, it can be embarrassing.  You can feel totally alone.

As I look back on my first stint as an undergraduate student, the signs were there, but I ignored them.  My grades were slipping.  I was spending more time in the band hall and doing TBΣ service than I was doing my homework.  Having your priorities in order is hard enough as an adult, much less as a college student.  Since I wasn’t telling anyone about these problems, no one had any idea how big of a hole I had dug for myself.  I felt I was alone in my misery.  I couldn’t have been farther from the truth, but I wasn’t ready to see it yet.  I had forgotten one of the most important lessons I had learned during my time as a membership candidate.

My home chapter at the University of Houston has long had a lesson that is taught during our membership education program called “the Priority Pyramid.”

The lesson teaches that prioritizing and time management are as important to us as members of Kappa Kappa Psi and Tau Beta Sigma as musicianship and leadership.  To be members of our fraternities and serve our bands, it takes outstanding student leaders.  Serving is like the icing on the cake.  But you can’t (or at least shouldn’t) have icing without cake… and in this case, the cake is being a successful bandmember, student, and person. 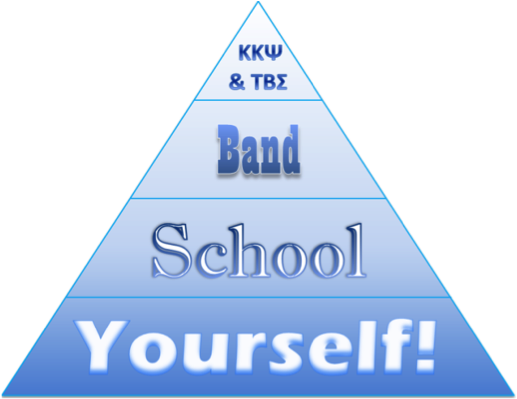 The largest part of the pyramid is labelled “yourself.”  The biggest priority for any college student should be their own personal well-being.  In TBΣ, we call it having ‘physical and mental qualities of an attractive nature.’  While it’s impossible to perfect, we should all take care of ourselves (and each other), including our physical and mental health, without abusing either.  If you set yourself up for success and surround yourself with positive influences, then being an effective Brother or Sister will follow.

The next layer of the pyramid is “school.”  That’s a tough one to master for many students.  It’s hard to put down the remote or the game controller, or avoid the party or the adult beverage, and grab that textbook.  But before we can be involved with Kappa Kappa Psi and Tau Beta Sigma, we have to be students first.  That means doing all the things we know we’re supposed to do, and not necessarily the night before ‘it’s’ due.  You have to manage your time wisely so that you can indulge in your favorite activities, including being involved in KKΨ and TBΣ.  If you have a little mastery at level two, we can move on to the next level: “band.”  Band is why we’re here.  If you take care of business, being on time for rehearsal, practicing your parts, memorizing that music, and giving it everything you have on the field and in the concert hall, then you’re ready for level four!

At the top of the pyramid is “KKΨ & TBΣ.”  It takes up the smallest amount of space in our pyramid.  But for most of us, it’s the best part, and there lies the true temptation: giving the wrong part of your pyramid too much importance.  I have given workshops at a variety of fraternity & sorority events talking about the Priority Pyramid and have received some great questions.  First of all, why is the most important priority at the bottom?  The answer is that without that solid foundation, the other part can’t stand up.  Second, why don’t you invert the pyramid so that the biggest part is on top?  Because if it was a real pyramid, it would be top heavy and topple over.  Couldn’t someone use the Priority Pyramid as an excuse not to attend important events?  The answer to that is ‘sometimes.’  The key element of this is to teach each other about time management and prioritizing.  If you work to keep your pyramid in balance, you will have the time to be a successful person, student, bandmember and chapter member, and you won’t have to miss important events.

Looking back, I wish someone would have reminded me about my Priority Pyramid.  At the time, it was exactly reversed from where it should have been.  I was putting so much energy into band and being a great Sister and District President in Tau Beta Sigma, that I lost focus on my academics.  Those extreme successes and failures led me to start feeling pretty bad about myself.  I was forced to take a hiatus from school (that’s code for drop out).  I was so embarrassed that I tried to hide it from the people who meant the most to me.  But I have an amazing circle of friends that I have acquired over the years.  They are Sisters and Brothers from across the country who supported me as I got my life back in order.

There are many of you out there who have made a misstep (or two) during your college experience.  The pressure to have a perfect transcript to get that big time job or get into that big time grad school is immense.  When speed bumps happen, you can feel embarrassment and shame. When you see a Brother or a Sister’s pyramid starting to topple over, stand by them and help them rebalance it. If it’s happening to you, don’t hesitate to rely on the support system you have in your life.

You should know that it is never too late to get your priorities back in order. This May, I will FINALLY walk across that stage and get that elusive piece of paper that will serve to confirm what I already know: the time we spend in Kappa Kappa Psi and Tau Beta Sigma is a time of education, not just in the classroom, but in all four levels of the Priority Pyramid.  Rebalance your Priority Pyramid and you can absolutely make your dreams a reality.