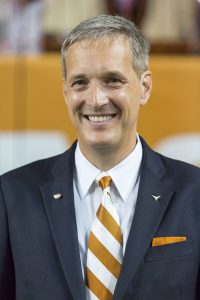 For the past seventeen years, it has been my honor to serve as faculty sponsor for the Alpha Tau Chapter of Kappa Kappa Psi at The University of Texas.  Like so many others who serve in this capacity at institutions across the country, I have witnessed students achieving excellence in music, leadership, and service – truly striving for the highest.  Perhaps I would have been able to anticipate at the outset of this work the personal fulfillment it brings to me, but what I could not have anticipated is how Kappa Kappa Psi would connect to my life in such a personal way, and through a person whom I never had the chance to meet.

Several years ago, my aunt sent an email that read in part “ I spent an interesting afternoon at a tiny little local jeweler today.  I was showing the jeweler a lot of old stuff from our family.  Among my grandmother’s things is a Kappa Kappa Psi pin.  On the back it reads CBT 2/22/42, and also has the Greek Alpha Delta symbols.”

Reading these lines created in me a of the past reaching out in a tangible way.  The initials CBT told me that the pin belonged to Charles Byron Tarleton, my maternal grandfather’s brother, who served in the US Army in World War II, and was killed in Italy in May 1944.  Over the years I had heard through family stories that Uncle Charles was a percussionist in the Caldwell (Ohio) High School band, and that he had also performed in the band at Ohio University for the two years he attended school there.  But until reading this message from my aunt, I had no idea he had been a member of Kappa Kappa Psi.

During his time at Ohio University, Charles enlisted in the ROTC, and was called for service in the Army beginning May 20, 1943.  His basic training took place at Camp Wheeler, Georgia, and he sailed for Europe in November of that year.  He landed at Casablanca, (then French) Morocco, and had a stop in Oran, Algeria before being deployed in Italy with Company E, 157th Infantry.  He participated in the invasion of Sicily, and was later with the American forces when they established the beachhead at Anzio on January 22, 1944, about 60 kilometers south of Rome.  Pfc. Charles Tarleton was killed on May 19  – one day short of being in the Army for a year, and only seventeen days before the Allied forces captured Rome on June 5, 1944. 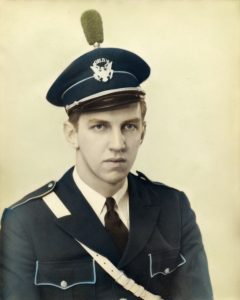 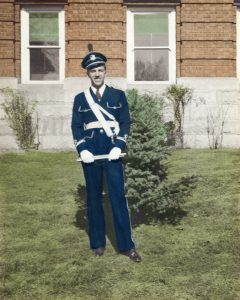 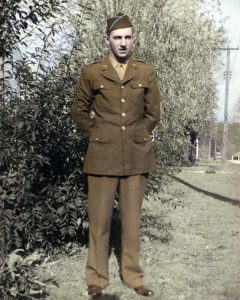 This part of my family history had been buried in the way that the stories of so many families from the WWII era have been lost: the pain of losing a brother and a son produced a silence that made it difficult to remember Charles as a college student and musician.  It seems that my great-grandmother kept Charles’ pin until her death, at which point it passed to my grandfather’s possession, and to my knowledge he never mentioned it to the family.  When my grandfather passed in 1997, the pin remained among his belongings, undiscovered until the house in which he and my grandmother had lived was sold several years later.  After the sale of the house, my aunt kept the box of jewelry that had belonged to my great grandmother, and the pin continued it’s shrouded existence until early 2012, when I received the email message that revealed its existence. 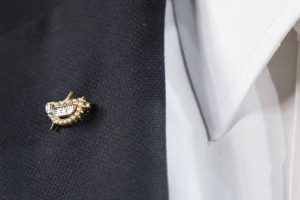 Close up of Charles Tarleton’s pin

I have no memories of my grandfather speaking about his brother, and prior to the revelation of the Kappa Kappa Psi pin my only connection to Charles was through a black and white posed photograph of him and my grandfather when they were young boys, which hung in my grandparent’s home for all of the nearly 35 years that I had the pleasure of visiting.

After several years of discussions about what to do with the jewelry, my aunt and her siblings decided that the Kappa Kappa Psi pin should be given to me.  I wear the pin proudly on the lapel of my jacket each time the Longhorn Band performs, reminded by it not only of Charles’ service to the United States, but of his love of music and the special connection he and I share in the brotherhood of Kappa Kappa Psi.

When I listen to my students sing the words of our Fraternity Song:

“This brotherhood that binds us altogether,

it will be strong and never will die.”

I, like many of you, tend to think of the bonds amongst the people joined in song at that specific moment.  Knowing the family and fraternal history that I share with Charles helps me to be more mindful of the much broader bonds that reach across time, distance, and experience.  We have much for which to be grateful, perhaps most especially for those who came before us, establishing and strengthening Kappa Kappa Psi.